The case of Grup Yorum was filed

The hearing of Grup Yorum members took place on February 14 at 10 a.m. in ÇaÄŸlayan Court in the 37th High Criminal Court.  Before the trial, a press release was issued in which members of the group on hunger strike in front of the courthouse, Grup Yorum volunteers, TAYAD families, artists, poets, writers and members of the People's Democratic Organization and their representatives were mentioned. According to the press release, the waiting time began in the courthouse hall. During the hearing, the member of Grup Yorum Ä°brahim Gökçek was heard. It is also known from reports of international health institutions that Gökçek, which has been in death fast for 242 days, was refused to be taken to Court by ambulance but was taken in a separate vehicle. It is not acceptable to take a person who has been fasting for 242 days in the courts in this way. It's torture.

After months of detention, Ä°brahim Gökçek, Emel YeÅŸilÄ±rmak, BarÄ±ÅŸ Yüksel and four revolutionaries began their trial on 14th February in front of the High Criminal Court in Istanbul. Ä°brahim Gökçek, the Grup Yorum bassist, is in death fast in protest against the constant incursions of the Idil Cultural Centre.

Lawyer Yaprak Türkmen, who is present in the courtroom to defend his clients, pointed out that the court had lost its neutrality and at the beginning of the hearing had the judge's rejection. In a decision of a few minutes, the President of the Court rejected the demand on the reason that "the request was malicious and aimed at prolonging the trial".

There was a time when justice in Turkey agreed with the law and did not admit the sentence of a trial in a few minutes.  That's why artists in this country, where justice doesn't work, put their bodies on trial with hunger strike protests.

The members of Grup Yorum defended themselves at the hearing: Ä°brahim Gökçek, Emel YeÅŸilÄ±rmak and BarÄ±ÅŸ Yüksel.  After the break, the court announced its decision to continue the detention of Ä°brahim Gökçek, who is in death fast, and to release BarÄ±ÅŸ Yüksel under judicial supervision and Emel YeÅŸilÄ±rmak. It was decided to postpone the hearing from 26 to 27 March 2020.

After the decision, the crowd in the court suported Ibrahim Gökçek with slogans.

We publish the defence of Ä°brahim Gökçek at today's trial:

Ä°brahim Gökçek: “I have been on hunger strike for 242 days. I want justice. I want to live like an artist of the people. I want all demands to be accepted. The time between prosecution and court is about 152 days. We also asked for the file, which arrived on Tuesday and consisted of 1000 pages. It is not possible to examine this file in such a short time. In that sense, we could not prepare the defence in the way we wanted. I came here, but can I come back again? I don't know if my lawyers, families and the artists who came to assist me can see me here next time. I could die! I could be paralyzed! I could lose my memory. I want to say something. I also want you to hear my request. I want to explain this process a little bit. First of all, I'd like to thank everyone here, one by one. There's a lot to say. There's really a lot to ask. We've waited 242 days for justice. I'm Ä°brahim Gökçek, 15 years employed as an artist in the music band Grup Yorum. I tried to make art like Pir Sultan. Don't be a palace clown. I composed lyrics and played bass for 15 years. I have visited more than 60 cities in my country. I've been to dozens of countries. I've given 100,000 concerts. We've become the voice for millions of people. It lasted until 2016 with the state of emergency. On July 15, 2016, I gave a concert for 40,000 people in Hatay SamandaÄŸ and before the concert, the policemen, who said that we could never do all this, disappeared immediately. But in 2017, a great political persecution began for Grup Yorum. The AKP used the FETÖ coup and attacked the public and the opposition. The Cultural Center Ä°dil has been stormed 12 times. Assaulted 12 times! Our instruments have been broken! Our guitars were broken. Bergüns' hair was ripped out. What kind of hostility is this? What have we done? All this happened because we kept singing people's songs. I don't accept the mutism of songs within songs. This case would not only be the testimony of Berk Ercan or Ceyhun Bay, one of whom was caught with a gun and the other is a gangster. They are characters created to write the calumnies and express the parts. Make sure they sell you first, after this process is completed. Now they've sold their souls, they're not even cadavers. I want justice. I want our Cultural Center never to be raided again. My friends will be released. We don't hand out dollars like AliÅŸan. We don't stitch things up like Yavuz Bingöl. Our biggest reward is 10,000 fans. Do you judge such a group? We want the concert bans to end. This is the 21st century, concerts are banned. Lists are being made against us. This is my Texas? Did we get a gun? Did we have a massacre? Did we say, "Whatever it was," and have it shortened? We formed a free orchestra and you covered us in lies. The Istanbul police are calling and threatening families. What kind of hostility is this? We didn't do this. We are here because we didn't do these things. There's nothing against us. We're under attack. Today is February 14th, Valentine's Day. But on my wedding day, we were in court with my wife. It would be lucky to have a drink with my wife outside, maybe hand in hand. But it's an emotion aside. Four years of our five years together, we spent them in jail. Wow.
It was impossible to examine 1,000 pages. We want time for the main defense. We are artists of the people. The charge is based on information from criminal drug pushers. It has nothing to do with what we do. We give free lessons, we give free concerts.  We do for free what the big companies do. I'm just saying one thing. I'm saying the supposed lies about me and that this case is illegal.

We have debts.  We sold the books. Those who blame us know that. But they say that: "We went to get the money." I'll answer to all of them if I have to. If there was a law that matched the existing laws, we wouldn't be here. We wanted to give outdoor concerts and be with our loved ones. The artists of the people cannot be criminalized and locked up. What did this trial do? Under what law are you trying to ban Grup Yorum? Even though we're here, Grup Yorum keeps on composing and singing! I've done 10 compositions. People die in Elazig's earthquake, people are vulnerable. Until 2017, I walked quietly down the street. But suddenly one morning I wake up and my name's on the list! I hope even my smallest enemy doesn't experience it. Who's a terrorist? Are artists? Or those who walk around with a Mehter hymn? We are not. You called Nazism a terrorist! Now they call us terrorists. I didn't run away. I went to the Cultural Center. From there I was arrested. I continued my art. Grup Yorum is not like that. When Grup Yorum was founded, I was 5 years old. Now I'm 35! The AKP, who will be in power tomorrow, will stay. How many powers have come and gone? But we will continue to stay. Grup Yorum cannot be silenced. Especially if they have died by continuing their art, they cannot be silenced at all. The proof is Helin Bölek and Bahar Kurt. They were also arrested for the same reasons I was. My friends are on extradition. Helin has turned the hunger strike into death fast. We've been told that no art is made for the people. We oppose it. We live in Turkey today and we should risk death to make art. But I don't want to die, I want to live. I want to play bass and go to concerts. I want the conditions to be fulfilled. You can't silence our art by imposing severe penalties and suppressing our works with weapons. Those who put "alternative" people against us, apply this pressure.

In the end, all the Pir Sultans and YÄ±lmaz Güney, live in our struggle. They have suffered much under the power of their time. Their songs for the people and their names are still alive. Grup Yorum today is KöroÄŸlu or Ruhi Su, who are growing every day. We receive power from them. Anything can happen, but we will never submit to injustice. If you're an enemy, we'll resist for you too. We refuse to accept injustice. I want to compose and sing. I want our freedom. Once again, I want to thank everyone to whom we belong. I want to thank our families, artists, intellectuals, lawyers and friends. I want to perform in new concerts. I demand my release and my discharge."

Emel YeÅŸilÄ±rmak, singer of Grup Yorum, defended herself with the following words: "Today we resist people's pain to share their joy. The miners called us to the concert and I was searched because we were singing. I learned that I was arrested for my alleged terrorism. What is the crime of being the voice of the workers? The reason we were on the Ministry of the Interior's terrorism list was to lead us to suicide. I was put on trial because I wasn't out. How can I get out? My name was on the list. The Ministry of the Interior made a list as a warning to us. I want to get out. I've been under arrest for a year. But the prosecutor added six files twice. They sentenced me to 5 years for May 1st. One day I'll be discharged from everything. TavÄ±r magazine, included in the indictment, was published for 40 years. It means working legally, in an authorized manner. We went to the TÜYAP stand and it's out of the question. 800 magazines are published by the CIA. Brother Ibo, who was arrested, is one of the senior members of Grup Yorum. Umit Bruder is a socialist poet. He lived in exile like us. Grup Yorum is not in the concert hall today, but in the resistance halls. The hearts of an entire people are with us today."

If we do not want Helin Bolek to die, then let us continue to call for resistance, both from Turkish prisons and from outside, and let us demand that these justified demands be accepted!

To stay alive
There is no other way
than give a voice to the resistance. 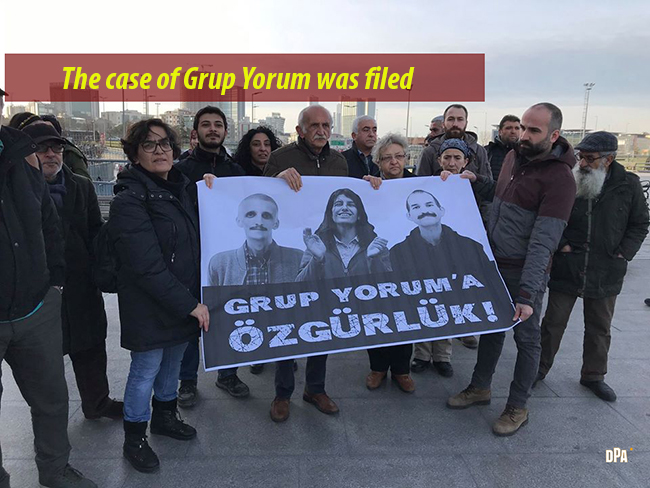